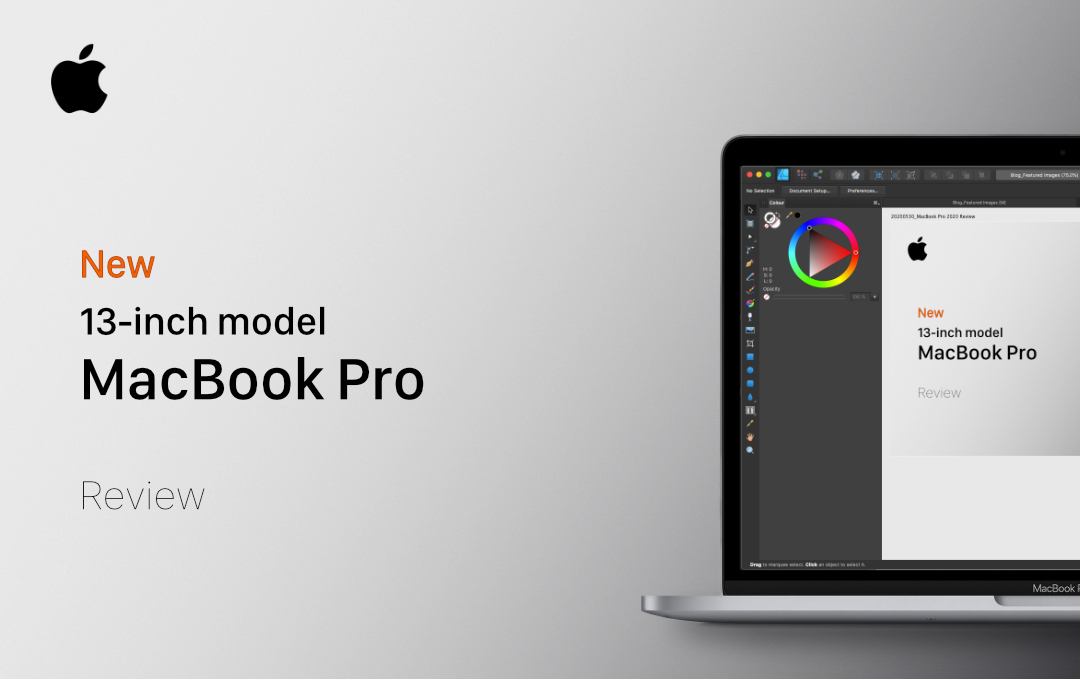 It has been 8 days since the arrival of my 13-inch MacBook Pro and the initial excitement has subsided with this being the first opportunity for me to put key to newly designed keyboard and offer my opinion on it, and the rationale as to why I upgraded in the first place. I did do an unboxing video for MacBites (an Apple community I am part of), which did contain some speed tests and initial thoughts, so if you want to watch that, jump right to the bottom.

In 2019 I took the decision to replace my ageing 2012 MacBook Air, and in doing so purchase a new Mac. Given that even the cheapest Mac at the time was in the region of £1,000 and the only reason I booted it up was to order something online which couldn’t be ordered through an accompanying iOS app. Everything work related was done on a Dell XPS 13 laptop running Windows, although it was compact, powerful and nicely designed, it was still running Windows.

Spending any money on a laptop regardless of how little seemed to be a poor investment as it would most likely just sit on my sofa and gather dust; unless of course I should hand back my Dell and use my own Mac for work.

I discussed this at work and initially there were a few concerns.

Concerns addressed, in early 2019 I purchased a refurbished 2018, 13-inch MacBook Pro and began using it.

The specs were fairly modest, 2.3Ghz Quard-Core i5, 8GB of RAM, and 256GB SSD – and almost every day it met my needs. I found my love again for using the Mac. I got the full set of Affinity apps, and added productivity tools such as TextExpander and Alfred to it (which I had used previously) which increased my efficiency dramatically. I must have booted Windows up probably half a dozen times in the first 8 months, the task I needed to complete was normally something quick, however often took hours due to the numerous updates that needed to be installed.

It was this booting up in Windows which sadly became more often, this being the result of me working on two Microsoft Office Add-in products which I needed to evaluate both on Mac and Windows. I also noticed that screen recording, whilst having a couple of other programmes open things started to slow down. Not to a point where it was unusable, but certainly was noticeable. I was starting to feel the effects of only having 8GB of RAM.

If there is one thing I hate more than a Windows machine, its a slow Mac. Product Management is a rather creative process, with the solutions often coming either out of the blue, or whilst ‘you are in the flow’. If the flow is broken, the solution will take longer to find.

The start of 2020 was when I was decided that the time was right to by a new laptop, and for it to be a bit more beefy.

Time To Buy – But What To Buy

At the start of 2020 the 16-inch MacBook Pro had been well established, and it looked pretty good. There were two issues with me buying it right away, the first unsurprisingly being the cost, the second the size.

The base model was £2,399 and that included only 16GB of RAM. Given that I was in the position where I was upgrading my machine after 13 months or so, I wanted to max the RAM out of any machine. In addition, given that it was to be used for work, purchasing the AppleCare felt like a sensible decision. Given the larger screen size the AppleCare would have set me back £399 alone, whilst the RAM upgrade to 32GB (yes I know it could be maxed at 64GB) another £400.

The cost wouldn’t stop there, as I have three chargers, one at home, one in the office, and one for travel. Now I know I could just use one charger, but I really don’t like rummaging around the bottom of desks each day, and id rather not fear that I’ve left it behind. So I have three. These alone, were at the time around £89.

In other words, cost alone the upgrade would have cost me £3,465 – a serious amount of money!

Also, if truth be told I wasn’t a fan of the 16inch size. In the office I’m connected to 2 external 27inch Dell Monitors, and use the MacBook Pro as a third. At home I am also connected to a 27-inch monitor, and use the MacBook Pro as a second, so this additional cost for 3 inches didn’t make sense, with the additional size and weight being a hinderance when I travelled rather than a benefit.

It took me a few hours to decide whether I wanted to buy one, ok it maybe took me an hour, and I had pressed the button. Given that it was being built to order with the i7 Processor and 32GB of RAM it took a couple of weeks for it to arrive, with it landing on the 22nd.

The setup process of my new Mac was actually a dream, and only took 60 minutes or so.

Before its arrival I had created a list of software which I used, and categorised it based on how important it was to use, and where I could get it from (you can view my list here). For all the software which wasn’t available on SetApp, I downloaded the installers and put them on a USB flash drive for me to use.

Documents are mainly stored on my Synology NAS, with a very small number of documents stored on my desktop and therefore back-up with iCloud Drive – so very little to worry about on that front at all.

Before I knew it I was up and running.

It had been widely reported that the release of OSX 10.15.4 was playing havoc on 16-inch MacBook Pros, causing them to have a kernel panic either at random intervals or when waking from sleep, and I knew of one friend who was suffering with this.

For this reason, I didn’t update my 2018 model but knew that my 2020 model would stand a very high chance of it coming pre-shipped with it; and alas it did.

Furthermore, it did experience the same kernel panics when it was put to sleep, however (thankfully) for me not only did disabling the PowerNap fix it temporarily, but the release of 10.15.5 fixed it permanently. However, for many 16-inch owners they aren’t as lucky and its a real shame that Apple are taking to so long to return machines to workable conditions for their owners.

One week in and im glad I purchased it, despite the initial issues with kernel panics with PowerNap.

My new machine runs much quieter and cooler (and will be able to confirm this when iStat Menus update their app so I can see the true temp). I can also run more applications with noticing any resistance or slowdown.

I have booted up my Windows VM, and after 2 hours of installing updates (which seems to always be the case), noticed that this to also run much faster.

Spending the amount of money I did on a new machine, especially during the current economic climate was something which crossed my mind as potentially being a bad decision. Mac’s do hold quite a bit of value even when used, with my 2018 being able to cover approx ⅓ of the cost of the upgrade, and with the amount of RAM I have, I don’t see me upgrading for at least 2 years (hopefully)!