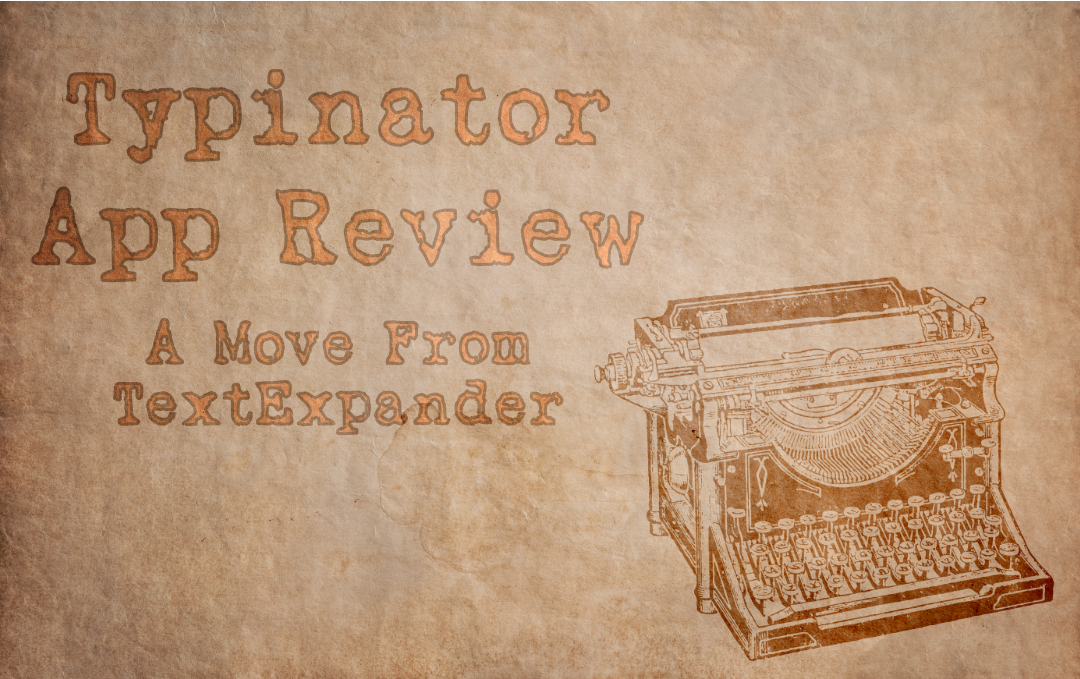 The title of this blog post has already given away pretty much the entire contents of this article. However, if you’re interested as to why I moved away from TextExpander, and instead took up Typinator feel free to read on.

Both Typinator and TextExpander provide very similar functions, in that they allow you to save ‘snippets’ of text and then ‘expand’ them in any application you are using. For example, you could have a snippet saved as ‘email which when typed expands to myemail@mydomain.com – or another one for ‘phone to expand to your phone number. It might not seem like a big task typing your email or phone number in, but if you can save a few seconds here and there, it all adds up.

You can go two steps further and expand spelling mistakes to their correct counterpart, or use ‘system’ information such as dates and times.

Adding spelling mistakes, in particular, might be a bit of an effort, but both of these applications ship with the ability to load shared snippet collections, and you guessed it – there are shared auto corrections for the majority common languages. The British English flavour has over 2200, and you can download other packs such as Emoji and HTML snippets – all for free.

I’ve been using TextExpander since I started using a Mac, so probably easily over 10 years. It did all of these things, so why did I feel the need to switch?

There were three main reasons for this move, and whilst one of them was cost, it wasn’t the factor which drove this decision the most.

Firstly was that TextExpander just stopped working for me. In the last 6 months (at least) it just stopped working. Every now and again I got a notification in Notification Center saying ‘Application X is blocking TextExpander’. Now I could have investigated the cause, but it was one of those things which I hoped just disappeared, and because these are ‘helper apps’ rather than mission-critical fell to the bottom of things I wanted to do.

It never got done.

Secondly, on a walk on Friday, I was listening to the 3rd episode of MacBites (which was aired on my birthday in 2007), and Elaine did a review of it. For nearly 13 years Elaine has been an advocate of Typinator. Given I have looked (and purchased) a lot of software on Elaine’s recommendation knew that if I needed to find a replacement, she wouldn’t let me down.

Finally, cost. TextExpander went subscription in 2016 and is now priced at $39.96 a year. It’s true that for this you get a Windows, iOS, and Android App, but considering I don’t do any real writing on any operating system other than OSX it seemed like I was paying for something I didn’t need.

Typinator is priced at $27.93 (at today’s conversation rates) and that is a one-off payment, with upgrade prices being available. As someone who really dislikes paying for subscription software (with one notable exception being SetApp), getting an application that worked, for less than the cost of one year’s subscription was a no-brainer.

Last night the discussion of TextExpander vs Typinator cropped up again on Marooned, and thought the time was right to give it a go. I didn’t even bother downloading the trial, I just jumped in with both feet.

24 hours later and what can I say, I’m very impressed. I would probably feel the same way about this type of application if TextExpander had continued to work for me. Not a single issue, it has just worked.

As it’s just worked, I’ve added more and more of my own snippets. Apostrophes in words, new date expansions, and even tried something new by adding ‘slang’ terminology which I have a habit of typing in, which should not really be in the documents I’m creating.

I did have a reason to contact their support, and that is that 1Password, when creating an item locks the system with a ‘secure input’ mode, and therefore prevents Typinator from operating (source).

It could be that this is what was preventing TextExpander from operating all along, but my issues occurred in things like Firefox, Chrome, and Sublime Text – apps I pretty much live in!

Typinator’s support was incredible, an informative answer was delivered to my inbox within 6 hours, and that was on a weekend as well!

I guess I could have given TextExpander a chance to fix it, but based on cost and effort to diagnose and fix, for me at least it was easier to switch.

Am I looking back? Not at all, and strange as it may seem, I’m actually looking forward to putting it to work on Monday with business based tasks. There will be hundreds of things I cant wait to turn into snippets, safe in the sound knowing this time (at least) they will be expanded without any issue.

The only very minor thing which I wish Typinator had that TextExpander has is ‘statistics’ on use. Call me a geek, but I’d love to know how many minutes (or hours) I’ve saved each month by letting Typinator do it’s thing. But that’s just minor and doesn’t stop it from being amazing!

To pick up your copy of Typinator head over to Ergonis Software.